The Ida Public Library was named after Ida Fuller Hovey whose father, General Allen Fuller, donated $5,000 to the city in 1883 to establish a library in her name. A Carnegie library grant of $17,500 was awarded on April 8, 1910, and the building was completed in 1912. An addition was added in 1987 that tripled the library’s space to 15,000 square feet. New expansion plans are on hold until the economy picks up. I’ve come to anticipate Carnegie libraries to be in the Classical Revival style but was pleasantly surprised to see that the Ida Public Library was designed in the Prairie style (with Classical Revival columns). 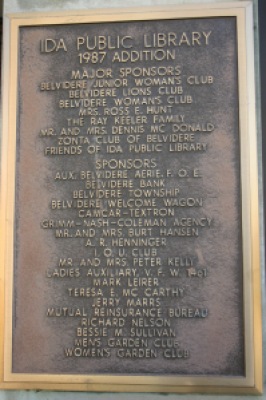 ‹ All That I Am by Anna Funder
Part 4 (The Statesman): Washington: A Life by Ron Chernow ›

What do you think? Leave a comment and let's talk! Cancel reply

This site uses Akismet to reduce spam. Learn how your comment data is processed.

“This book opened a creative, inquisitive door the adult me had closed years ago” – Cyndy