Booktopia happened this weekend in Manchester, Vermont. The event was started years ago by Anne Kingman and Michelle Kindness of Books on the Nightstand. Last year they announced it would be their last year organizing it and (thankfully) the Northshire Bookstore decided to keep the tradition going, for which those of us who have attended are very grateful.

This year’s event was held on Friday and Saturday and included multiple small group talks with each author on both days, an evening of social fun revolving around books (book trivia and a Yankee book swap) and dinner. The fun culminated on Saturday evening with a ten minute talk by each author.

This years authors were:

Ray O’Conor, She Called Him Raymond

A letter penned in 1944 uncovered the powerful and heartfelt story of Helen Gregg, one of eight children of Irish immigrant parents raised in the miseries of Hell’s Kitchen during the Great Depression, and Clarence R. Stephenson, a young aspiring B-17 pilot reared in the small, struggling city of Ironton, Ohio. Fate brought them together in 1942, when Helen and the young aspiring aviator literally ran into each other in New York City’s Central Park. From the moment their eyes first met, they knew their lives would never be the same.

This captivating and poignant story of their struggles and romance, his exploits as a highly decorated B-17 pilot during World War II, and the tragedy that tears them apart, will inspire you while tugging at your heart. With his investigative skills as a former Special Agent and his deftness as a writer, Ray O’Conor unearths a family’s secrets and skillfully weaves a compelling story of two ordinary people who led extraordinary lives during the most compelling period in history.

“Ray O’Conor abandoned his career to search for his namesake, a heroic B-17 pilot who died in World War II. What he found touches the heart and stirs the soul.”
James Bradley
#1 New York Times best-selling author of Flags of Our Fathers and The China Mirage

In the beautiful, barren landscape of the Far North, under the ever-present midnight sun, Frances and Yasha are surprised to find refuge in each other. Their lives have been upended–Frances has fled heartbreak and claustrophobic Manhattan for an isolated artist colony; Yasha arrives from Brooklyn to fulfill his beloved father’s last wish: to be buried “at the top of the world.” They have come to learn how to be alone.

But in Lofoten, an archipelago of six tiny islands in the Norwegian Sea, ninety-five miles north of the Arctic Circle, they form a bond that fortifies them against the turmoil of their distant homes, offering solace amidst great uncertainty. With nimble and sure-footed prose, Dinerstein reveals that no matter how far we travel to claim our own territory, it is ultimately love that gives us our place in the world.

Why should a man care for his parents when they failed to take care of him as a child?

Kyung Cho is a young father burdened by a house he can’t afford. For years, he and his wife, Gillian, have lived beyond their means. Now their debts and bad decisions are catching up with them, and Kyung is anxious for his family’s future.

A few miles away, his parents, Jin and Mae, live in the town’s most exclusive neighborhood, surrounded by the material comforts that Kyung desires for his wife and son. Growing up, they gave him every possible advantage—private tutors, expensive hobbies—but they never showed him kindness. Kyung can hardly bear to see them now, much less ask for their help. Yet when an act of violence leaves Jin and Mae unable to live on their own, the dynamic suddenly changes, and he’s compelled to take them in. For the first time in years, the Chos find themselves living under the same roof. Tensions quickly mount as Kyung’s proximity to his parents forces old feelings of guilt and anger to the surface, along with a terrible and persistent question: how can he ever be a good husband, father, and son when he never knew affection as a child?

As Shelter veers swiftly toward its startling conclusion, Jung Yun leads us through dark and violent territory, where, unexpectedly, the Chos discover hope. Shelter is a masterfully crafted debut novel that asks what it means to provide for one’s family and, in answer, delivers a story as riveting as it is profound.

From the author of the acclaimed The Curiosity comes a compelling and moving story of compassion, courage, and redemption

Deborah Birch is a seasoned hospice nurse whose daily work requires courage and compassion. But her skills and experience are tested in new and dramatic ways when her easygoing husband, Michael, returns from his third deployment to Iraq haunted by nightmares, anxiety, and rage. She is determined to help him heal, and to restore the tender, loving marriage they once had.

At the same time, Deborahs primary patient is Barclay Reed, a retired history professor and expert in the Pacific Theater of World War II whose career ended in academic scandal. Alone in the world, the embittered professor is dying. As Barclay begrudgingly comes to trust Deborah, he tells her stories from that long-ago war, which help her find a way to help her husband battle his demons.

Told with piercing empathy and heartbreaking realism, The Hummingbird is a masterful story of loving commitment, service to country, and absolution through wisdom and forgiveness.

This extraordinary debut novel by Sophie McManus is a contemporary American tragedy of breathtaking scope: a dramatic story of pharmaceutical trials and Wall Street corruption; of pride and prejudice; of paranoia and office politics; of inheritance, influence, class, and power.

Cecilia Somner’s fate hangs in the balance. A larger-than-life heiress to a robber baron’s fortune, once known as much for her cruel wit as for her tremendous generosity, CeCe is now in opulent decline. Afflicted with a rare disease and touched by mortality for the first time, she finds her gilded, by – gone values colliding with an unforgiving present. Along with her troubled son, George, and his out – sider wife, Iris, CeCe must face the Somners’ dark legacy and the corrupting nature of wealth. As the Somner family struggles to find a solution to its troubles, the secrets and lies between CeCe, George, and Iris grow entangled. CeCe’s world topples, culminating in a startling turn of events that is as unforgettable as it is life-changing.

While no riches can put things right for the unfortunate Somners, when all is lost, they learn what life beyond the long, shimmering shadow cast by the Somner dynasty may become. Sophie McManus’ The Unfortunates,hilarious and heartbreaking by turns, is most of all a meditation on love: as delusional obsession, as transformation, and ultimately as a coming to grace.

The marriage of Florine Gilham and Bud Warner is a cause for celebration down on The Point, the Maine fishing village where they grew up. Yet even as the newlyweds begin their lives together, Florine is drawn back into the memory of her mother, Carlie, who vanished when Florine was twelve. As unexpected clues regarding her fate begin to surface, Florine and Bud face the challenges of trying to solve an old mystery while building a new marriage and raising a family. Morgan Callan Rogers’s Written on My Heart will delight readers who love feisty, poignant characters and the beautiful, unforgettable Maine coast.

A globetrotting, time-bending, wildly entertaining masterpiece in the tradition of Cloud Atlas.

Publishers Weekly raved that “with near-universal appeal . . . Seay’s debut novel is a true delight, a big, beautiful cabinet of wonders that is by turns an ominous modern thriller, a supernatural mystery, and an enchanting historical adventure story.” Set in three cities in three eras, The Mirror Thief calls to mind David Mitchell and Umberto Eco in its mix of entertainment and literary bravado.

The core story is set in Venice in the sixteenth century, when the famed makers of Venetian glass were perfecting one of the old world’s most wondrous inventions: the mirror. An object of glittering yet fearful fascination—was it reflecting simple reality, or something more spiritually revealing?—the Venetian mirrors were state of the art technology, and subject to industrial espionage by desirous sultans and royals world-wide. But for any of the development team to leave the island was a crime punishable by death. One man, however—a world-weary war hero with nothing to lose—has a scheme he thinks will allow him to outwit the city’s terrifying enforcers of the edict, the ominous Council of Ten . . .

Meanwhile, in two other Venices—Venice Beach, California, circa 1958, and the Venice casino in Las Vegas, circa today—two other schemers launch similarly dangerous plans to get away with a secret . . .

All three stories will weave together into a spell-binding tour-de-force that is impossible to put down—an old-fashioned, stay-up-all-night novel that, in the end, returns the reader to a stunning conclusion in the original Venice . . . and the bedazzled sense of having read a truly original and thrilling work of art.

B. A. Shapiro, The Muralist 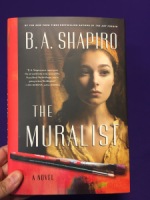 From the author of the New York Times bestseller The Art Forger comes a thrilling new novel of art, history, love, and politics that traces the life and mysterious disappearance of a brilliant young artist on the eve of World War II.

Alizée Benoit, an American painter working for the Works Progress Administration (WPA), vanishes in New York City in 1940 amid personal and political turmoil. No one knows what happened to her. Not her Jewish family living in German-occupied France. Not her artistic patron and political compatriot, Eleanor Roosevelt. Not her close-knit group of friends, including Mark Rothko, Jackson Pollock, and Lee Krasner. And, some seventy years later, not her great-niece, Danielle Abrams, who while working at Christie’s auction house uncovers enigmatic paintings hidden behind recently found works by those now famous Abstract Expressionist artists. Do they hold answers to the questions surrounding her missing aunt?

Entwining the lives of both historical and fictional characters, and moving between the past and the present, The Muralist plunges readers into the divisiveness of prewar politics and the largely forgotten plight of European refugees refused entrance to the United States. It captures both the inner workings of today’s New York art scene and the beginnings of the vibrant and quintessentially American school of Abstract Expressionism.

B.A. Shapiro is a master at telling a gripping story while exploring provocative themes. In Alizée and Danielle she has created two unforgettable women, artists both, who compel us to ask, What happens when luminous talent collides with inexorable historical forces? Does great art have the power to change the world? And to what lengths should a person go to thwart evil?

Great books, all, don’t you think?  Have you read any of these yet? I’m currently listening to The Hummingbird on audio and will start The Mirror Thief next. After that I want to dive into Jung Yun’s Shelter.

‹ Agnotology
Out Today: The Mirror Thief by Martin Seay ›

What do you think? Leave a comment and let's talk! Cancel reply

This site uses Akismet to reduce spam. Learn how your comment data is processed.